A very Happy New Year to you all! Yes, 2016 is upon us in all its futuristic-y sounding splendor. Though still without hoverboards, we are now venturing into the unknown beyond that foretold by Back to the Future. Good luck everyone.

Like most years for most people, 2015 was a year of ups and downs for me, but probably the biggest highlight (obviously alongside a new Star Wars) was the publication of my first novel Echoes in September. I won’t say the experience was all rosy. It took a lot of work, stress, a few tears and several bags of Haribo to get there, but being able to hold an actual copy of an actual book that I’d written in my actual hands… well, that was something rather special. 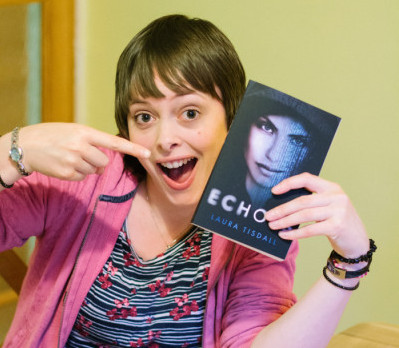 Firstly, quite a few people have been asking about a possible Echoes sequel, so I just wanted to address that a bit more fully. Is there one? The short answer is currently no – Echoes was originally intended to be a standalone. However, it is a qualified and slightly complicated no. The thing is that standalone intentions or not, when I finished Echoes – or even before I finished it – I was already asking in my head what happened to these characters next too. And without necessarily meaning to, I kept on thinking about it. A lot. What this led to was that in the last couple of months of 2014, I did actually write a first draft of an idea for a sequel. It was set a year after Echoes and followed two of the main characters (no spoilers!) in their first year at college. The thing was, by the time I got to the end of writing it, I wasn’t sure it really ‘worked’. Or something about it wasn’t working… the pacing, definitely, was all wrong. I realise lots of problems can be fixed by redrafting, but at the time, I felt really stuck with it. The other issue was that I’d since had another idea for how to continue the characters’ stories further, a few years down the line, and I liked that idea more and various things that happened in this original sequel made this later continuation harder… and… and many ands…

Long story short, I shelved it. And that is where it still is. I’m not saying a sequel of some kind will never be finished. People caring about these characters enough to ask for one is the most wonderful feeling and, please get me wrong, I’m sooooo grateful for that. Ultimately, I would love to release a story about what happened next – or even, dare I say it, more than one – but I can’t promise it just yet. If it’s going to happen, I need to let the ideas stew in my head a little longer before writing them down and I don’t want to do it unless I feel sure of the idea that I have; be that a reworking of that first draft or something new. Sorry if this sounds a little arty-flarty or inadequate, I just wouldn’t feel comfortable putting out something I didn’t fully believe in, that didn’t feel ready. I’d rather wait and, if there is a sequel, make sure it’s the right one and not a rushed one. So, it’s a no, but also a maybe…

This doesn’t mean I’m not working on something, though. In fact, slightly bizarrely, what I’ve been working on for the last couple of months is a sequel that was put on hold in order to write Echoes. (See, I do go back to things!) To explain, the first novel I wrote was a dystopian sci-fi called Tainted Earth. I’ve written quite a bit about it in past blogs, but the short version of its history is that I was signed to an agent with it, but it sadly never ended up getting published. Here’s the blurb:

2129. Eighty years after a third world war left much of the earth uninhabitable, the lives of teenage friends Kaley and Jonah are changed forever when a bomb attack releases a highly infectious, bioengineered virus into the remaining population. Known as the Taint, the disease is deadly to most, but leaves the few survivors mutated and changed. When Kaley is affected, but Jonah is not, forces beyond their control seek to tear them apart. They must fight in order to survive this strange and lonely new world, and, ultimately, face the question of what it really means to be human.

The thing is Tainted Earth was supposed to be the first of a trilogy and the overall arc is a story I’ve had in my head for probably about eight or nine years now. With Echoes out, I wanted to go back and finish it. It’s already a couple of years since I worked on the first one and part of me feels if I don’t write the others now, maybe I’ll lose my excitement for the idea or forget various details that currently exist solely in my head, and never actually complete it. So for the past few weeks, I’ve been reacquainting myself with that world, writing up character back-stories and filling in timelines for the other books – with a view to rewriting Tainted Earth then running right through and drafting the two sequels back-to-back. I have no idea when it will all be done. I also don’t really have a plan for what to do with it when it is, but I do hope to be able to release it eventually… somehow… some way… As I said, this is a story I’ve had in my head for a reeeeally long time and, well, I would love to finally be able to share it with you all 🙂