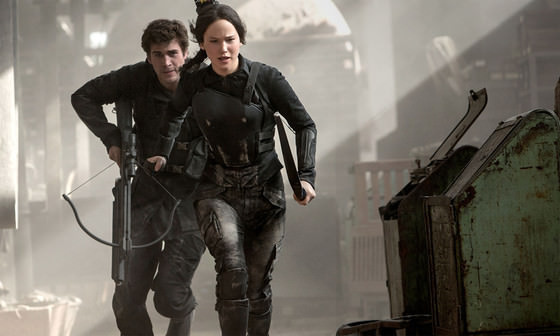 So I just got back from seeing Mockingjay – Part 1, the third and penultimate movie in The Hunger Games series. I’d heard a lot of things about the film before actually seeing it – both mixed and good – read numerous reviews and articles about it, and watched the trailers more times than was strictly necessary. As a big fan of both Suzanne Collins’ original book series and the movies, it’s safe to say I was majorly looking forward to this next one…

[WARNING: May contain some minor spoilers about The Hunger Games.]

Well, I was not disappointed. Not even a little bit.

A lot has been made over this film being only a ‘Part 1,’ and the rights and wrongs of studios splitting the last movie of a franchise into two (a la Twilight, Harry Potter, Divergent…). I admit I was a bit sceptical about this when I first heard about it too, but I went into this movie really trying to not focus on that and instead seeing it as one ‘episode’ in the overarching story of the series. In this regard, it worked brilliantly. Mockingjay – Part 1 has a key and incredibly moving section of the story to tell and, in the hands of Catching Fire director Francis Lawrence, it also maintains great continuity with rest of the series. Much of what made the earlier films so successful works again here; a truly exceptional cast, a chillingly realised vision of Panem, and an absolute faithfulness and respect for Suzanne Collins’ source material. Part of the reason I really love this film series is this last point – it genuinely trusts that The Hunger Games, as Collins told it, is a good story. It doesn’t try to gloss over the darker aspects, dumb down or simplify the dystopian society it is set within, or patronise audiences by thinking glossy Hollywoodised action moments are required every five minutes in order to keep us engaged. It trusts the story and it trusts that Collin’s incredibly well-drawn characters are what keep us there.

On this note, I also just have to say something here about Katniss Everdeen. I love this character because whenever I read The Hunger Games or see the movies, she just feels real and whole. She’s not some kind of cardboard cut out of a hero who always does what is right and does it for the right reasons. Her decisions are not perfect, but she is kind of perfectly flawed in an honest way that makes her seem like an actual person – and that in turn makes you root for her and feel for her suffering all the more.

And Jennifer Lawrence in her portrayal of Katniss? Just give her ALL of the Oscars already. ALL of them. [Mild spoiler warning] Mockingjay opens with a shellshocked Katniss hiding away from everyone in a store room in District 13, reeling and emotionally scarred from all that happened in Catching Fire. In just a few words, Lawrence has you fully engaged back in her plight. Soon after, there’s the scene where Katniss returns to the rubble of District 12 and for several minutes – without ANY words this time – she has you utterly crushed.

[I mean, side note here, is Jennifer Lawrence actually able to be bad in anything? Winter’s Bone, Silver Linings Playbook, X-Men… the girl is on fire. (See what I did there? Yeah. Erm, sorry.)]

But, as I mentioned before, this isn’t just a movie built around one great performance – the whole cast is exceptional, from Josh Hutcherson as the quickly deteriorating Peeta taken prisoner by the Capitol, to the late Philip Seymour Hoffman as Plutarch Heavensby in what was sadly his last role. Elizabeth Banks as the displaced Effie Trinket should also get special mention – she is both funny and heartbreaking at the same time and should win all sorts of prizes. In fact, they all should. Can we give the whole cast prizes?

Okay, I shall stop now. Gush over. But, yeah, go see it. Suzanne Collins is a genius. This is how great storytelling is done and I am kind of just in awe.