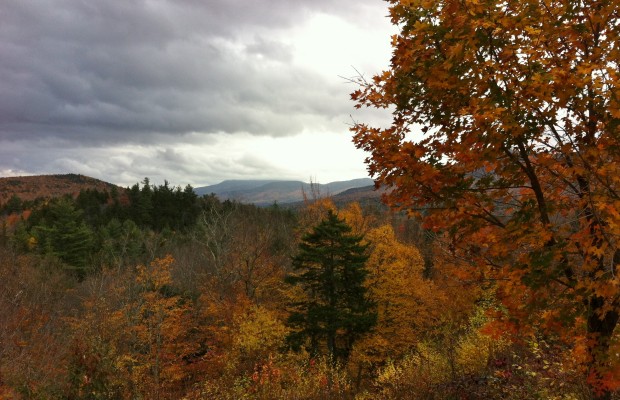 I recently got back from a trip to New England. It was only my second time in the States (I wrote about the first here) and I have to say I did kinda love it! The scenery was amazing (they really don’t exaggerate that thing about New England being beautiful in the Fall), the food was great, I LOVE American Netflix (obviously the most important thing on a holiday) and the people were just so nice (something I noticed on the first trip too). Maybe I have just been very fortunate to meet lovely people on both trips, but pretty much everyone I encountered was welcoming and friendly. [On this note, I love the whole people saying ‘you’re welcome’ in response to a ‘thank you’. It made me feel warm and fuzzy.]

In a way, going to America is a strange experience because on the one hand everything feels so very familiar due the cultural crossover in TV and movies, but then on the other you find yourself to be a bit alien when you’re actually plopped within that same culture because you suddenly realise how very, very British you sound in comparison and how kind of bumbling you really are… Also, the fact that you get excited by dollar bills and feel slightly fraudulent using the word ‘restroom’ – so it’s like it’s familiar and not at the same time and… Sorry, I’ve tangented and it’s only paragraph two. But yeah; lovely place, lovely people, great experience 😀

So, the purpose of this trip was two-fold; firstly, it was just a holiday (wahey!), but the reason I’m really writing about it here is that it was also partly to visit the place where my current book, Echoes, is mainly set; Watertown, Connecticut. As well as this, the book I hope to write next just happens to be set in the Cambridge and Boston area, so I got to spend some time there too! Double points.

I know people often say you should write about what you know, but there were a number of plot reasons why I needed to set Echoes in East Coast America, despite having only been there once, very briefly, by the time I started writing it. I tried to counter this by doing a LOT of online research – Google maps on satellite image was especially helpful for this – and there is now a great deal you can learn about a place by doing that kind of thing, but it was a very different experience to actually find myself standing there; to be standing on Main Street, which I’d seen so many pictures of and which, in the book, is where my main character works.

Surreal would be one word.

I think it’s interesting because when you’re writing a fictional story (for me, anyway), there is always an element of your character’s surroundings wrapping around them and, subsequently, those surroundings becoming warped by that character’s perception of them. Maybe this is technically the wrong way to go about it (and I shouldn’t admit to it!), but I also find that, to an extent, the surroundings also kind of bend to become what you need them to be within the narrative. So, because I’d never been there before in person, Watertown had become this fictional place in my head. It was built around the facts that I knew and the pictures that I’d seen, but it also somehow felt not quite real to me because I spent so much time imagining it… if that makes any sense at all??? So to be there, in the real deal, it was strange. And it was strange to be there as me and not thinking of it solely through the voice of my main character.

I’d say it was definitely a valuable experience, though. I’m not sure how many specific things I picked up to put in – I’m not sure that you can really pick up a great deal in one day – but I think when you do finally have the real general picture of somewhere in your head, part of that will inevitably slip in. Visiting Cambridge and Boston was especially useful for picking up little ideas for the next book. Ideally, I guess you would always visit a place before you start writing about it, but then that’s not always practical when the place you want to tell your story in is half way round the world. I suppose that’s why it comes back to the people saying write what you know. But then again, for someone who loves sci-fi and fantasy and superheroes and spy stories (and etc, etc), it’s quite possible – probable, in fact – that I’m never reeeeally entirely going to be able to do that anyway…

To finish, here’s some pretty pics of New England. Almost everywhere we went there was just one amazing view after another. It’s possible I might have taken nearly *ahem* one and a half thousand photos by the time we got back.