So, I’ve realised it’s been an alarmingly long time since I’ve posted any kind of update on here. We don’t need to talk about how long exactly, or if it stretches into the years category – because, obviously, that would be ridiculous – but, hey, I’m here now.

The series in question is not related to my previous book Echoes, but it is a story idea that I’ve mentioned on here previously; Tainted Earth. It’s a YA dystopian fantasy, set in Greenland about a hundred years in the future, and follows teenagers Kaley Elingaard and Jonah Reese after a bioengineered virus is released into the island’s population. Things start off fairly badly and then, well, they get, um, worse…

It’s a series that I’ve been working on, on and off, for about five or six years now (and had in my head for a few longer), but over the past year or so I’ve been making a concerted effort to finish the whole darn thing. And, I’m delighted to report that, shockingly, I almost have.

By this, I mean Book One is now on its ninth draft, Book Two on its fourth (and has just been given to its first HUMAN PROOF READER) and Book Three at least exists in first draft form. My next task is to make Three suitable for human consumption too, but the end is now in sight. Which is somewhat remarkable, to me at least.

I’ve worked on a few big projects now and Book Two is the thing I’ve found hardest to write of all of them, by a big old country mile. There were a few points mid drafting where the end was most certainly not in sight. Not even, like, blurrily, on the distant horizon, if I squinted through binoculars. You’ve probably heard other writers say this, but sometimes you really do fall out of love with a project mid writing it, and decide it’s all awful, and the most terrible thing any human being has ever written, and why on earth have you wasted all this time on it, and why are you trying to be a writer AT ALL, Laura, I mean, GOSH, why did you even think you could do that when you should just give up and GO AND BE AN ACCOUNTANT LIKE YOUR PARENTS!

That MAY have happened slightly with Tainted Earth Book Two.

However, what you’ve also probably heard a lot of writers – even proper, grown up ones – say is that this happens to almost everyone at some point, and the key is often to just keep going. It was helpful to remind myself of this. Struggling with a chapter is probably a sign it needs work or some plot thread needs restructuring, but it may not be quite as world-endingly hopeless as you feared at the low point. So, battle through I did. I spent six months alone on one redraft. And, another redraft later, I’m now really happy with where the story is. I’ve even become EXCITED about it again, and am actually looking forward to getting stuck into a second draft of Book Three. Even if it never gets published – I hope it will, I’d love to share it with you all one day – but even if it doesn’t, I can genuinely say I’m happy I persisted and I would do it again. This was a story I’ve wanted to tell, wanted to get to the end of, for aaaaaages, and even if it’s just for me (and that first human proof reader), I’m so glad I did.

To finish, here is a picture of Book Two – now my friend again – just to prove it exists. 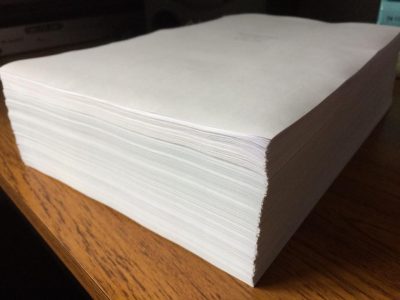